Will the US see a youth revolt like it experienced in the ‘60s?
By Stephanie Salinas 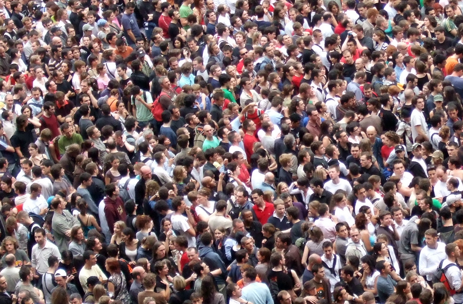 Young boomers who went to the streets in protest during the 1960’s are now finding themselves at the opposite end of the spectrum as today’s young adults are getting frustrated with the bureaucracy.  Otherwise known as the “New Left,” student radicals during the sixties stood up against: conformist views of the fifties, including the draft, voting rights, union representation, equal rights, equal pay, and a stronger say in government.
Sound familiar? That generation known as the Baby Boomers, along with the Chicano movement, shares similar fervor of today’s generation of young adults. The current generation, now known  as the Millennials, are looking to Cesar Chavez’s strategies and spirit to guide them for what they believe are critical issues:  Social equality, job opportunities, equal pay, education, stronger voice in government, and immigration reform.

Latino Millennials
Nationally, the total number of Millennials 18-29 account for forty-six million Americans, of which Latinos make up nearly 20 percent. The non-Latino White population is experiencing a record low of just a little over 59 percent.  In California, A Pew Study shows Latinos ages 49 and under makes up 64 percent of its overall Latino population.
In terms of issues, studies show Latino millennials are especially disappointed with President Barack Obama’s administration for maintaining the largest deportations of undocumented immigrants by any President holding office since 2008.
The Administration’s insensitivity to the impact on families (many which had one or both parents deported and children left in foster care), to the deportation of military servicemen and women, the immigrant children whose lives, no fault of their own, are a question mark after having grown up as Americans, but living without a country.
Of those protesting only the group known as the DREAMERs have the most to lose.  There are 1.7 million undocumented Latinos age 30 and under, who live in fear of deportation. Their economic contributions have been documented by the nation’s most respected economists, yet bureaucrats use them as bait and scapegoats for all the economic ills America faces.
Frustrating among Latino millennials is the lack of Boomer respect responsiveness, considering they were the ones who lead for political and social change in the 60s.

Who Latino Millennials?
The makeup of the young may reflect a more diverse picture today than it did 50 years ago.  Besides race, studies have found very distinct differences in characteristics that are quite contrary to older Americans.
Today’s youth are less religious.  In fact one in four do not associate themselves to a specific religion.  Latinos were once believed to be all Catholic identified themselves as Evangelicals, protestants, and even Mormon.
Where Boomers are still focused on divisions based on gender and race, Millennials are viewed as twice more tolerant of different races.  In fact, demographers believe interracial marriages will be highest among this group, breaking existing racial barriers across the nation.
Millennials are more politically progressive and studies suggest this group will force both dominant political parties to rethink their current divisive strategies. This may be largest group to identify themselves as “declined to state” and opt not to align themselves with either Democrats or Republicans.  Moreover, in California, which has the top-two vote getter system for the primaries, the odds of third party and no-party candidates stand a good chance to get elected into state-level office.
Finally, Millennials view Boomers as a selfish group without regard toward addressing the economic challenges being created for Millennials to fix. This includes the burden of Obamacare, Social Security, government pensions and world relations. Moreover, there are not enough jobs currently for the millions of Millennials graduating with a college degree.

Discouraged and Fed Up!
As a result of the lack of economic progress, opportunity and political cohesion Millennials are frustrated with a future ruled by the oldest class of Americans. President John F. Kennedy’s famous quote “Ask not what your country can do for you. Ask what you can do for your country,” is the type of attitude more Millennials are adopting as a broken government continues its trend of being a disappointment.
Writer Zoe Carpenter of The Nation recently wrote, “In sharp contrast to 2008, a mere 20 percent of Millennials today think that government spending is the way to improve the economy.”
By seeing those under 35 experience a 37 percent drop in net work between 2005 to 2010 and student debt now reaching over $1 trillion, current bureaucratic leaders are begging for a Millennial revolt.
Latino DREAMERs are leading the charge for change, but this is merely a drop in the bucket. Today’s lack of voting is not apathy, but frustration with bureaucratic leaders. Millennials are reaching a point where demands for change will reflect those of Boomers fifty years ago. - SacLatino
Email ThisBlogThis!Share to TwitterShare to FacebookShare to Pinterest
Labels: Chicanos, Hispanics, Latinas, Latino boomers, Latino millennials, Latinos, Mexican Americans, SacLatino