A one-time cancer survivor and now afflicted again, Gloria is determined to help find a cure for Leukemia.
By Adrian Perez, SacLatino 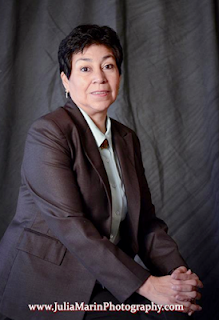 For many, it is difficult to understand the passion and determination of a woman who has already given greatly to her community, but insists on giving more.  But for those who know Gloria Torres, it is that commitment and determination that they’ve come to expect from the five-foot dynamo.  To expect any less from Gloria would be unbecoming of her and would raise suspicion that there was something wrong.
Born in the picturesque community of Truckee, California, Gloria grew up in a large family where her father worked for the railroad.
“It was like a ‘Payton Place,’ where everyone knew each other,” says Gloria.  “And, growing up with my grandmother and 9 uncles, I learned early to never wait for someone to help.”
Today, Gloria finds the sound of trains very soothing and reminds her of a childhood where family was key.
“I learned from my family, life skills and the basic skill of helping,” adds Gloria.  “We had an altar in our house to honor our passed family members, decorated with flowers and candles and now, my daughters are continuing that tradition.”
Gloria moved with her family to Sacramento at a young age, becoming a graduate of Sacramento High School, Sacramento City College and finally attending Sacramento State University.
Growing up, it became natural for Gloria to volunteer and help groups and organizations with a mission to help the under-served communities.
“I got involved with family oriented events where I could share my Mexican and Native cultures,” says Gloria.  “Educating children through stories is important.  I believe the parents provide the molding of a child, but friends and teachers enrich their upbringing.”
Gloria’s volunteerism has not gone unrecognized.  Wells Fargo Bank honored her as “Volunteer of the Year” and the Mexican American Hall of Fame acknowledged Gloria for the community work she has donated.  And now, Gloria has volunteered again, to get the Sacramento Latino community to give to the Leukemia Lymphoma Society.
“I have gotten to know many people through our ‘Cup of Love’ project whose lives have been changed because of cancer,” says Gloria.  “For me, it has become very important for us to find a cure, especially for the many children afflicted with this disease.”
In 1999 Gloria was diagnosed with Leukemia, a blood cancer commonly associated with children.  But, as an adult, the treatments available are different.  Gloria was given experimental medication that helped the cancer go into remission and she was cancer free for 15 years.
“Last year, I worked on the Leukemia Lymphoma Society’s ‘Man and Woman of the Year’ and helped raise over $70 thousand for our candidate alone,” says Gloria.  “I had a great time, but more importantly we knew the amount contributed would go toward more research.  So, I decided I could do more for this research by running for ‘Woman of the Year’ this year.”
Gloria’s team began meeting toward late fall of 2012, designing several events for the 10-week campaign scheduled to begin March 1, 2013.  But in February 2013, just as the campaign was getting ready to launch, Gloria received a disheartening blow.  Her cancer had returned.
“On February 22, 2013, I went for my yearly checkup and was told that the leukemia had returned,” says Gloria, wiping a tear.  “I was devastated.”
She informed her team about the doctor’s findings and told them she was now more committed than ever to raise at least $50 thousand for cancer research.  Immediately, the team grew in size and helped launch the campaign with a successful spaghetti feed.  More and more volunteers joined the campaign and the creative events brought members of the community from all corners and races.
On May 11, 2013, the campaign will end with a formal event, ‘The Grand Finale Gala’ to be held at the Hyatt Regency Hotel in downtown Sacramento.  By this date, Gloria and her team will have concluded the most number of events centering around the Latino community ever conducted in Sacramento.  From film lectures, to fashion shows and from spaghetti feeds to chili cook-offs, there is no doubt Gloria’s volunteerism has brought this community together.  Moreover, it has brought a higher awareness to the Latino community of why it is important to volunteer.  - SacLatino