Is California headed toward another “Gold Rush”?
By Adrian Perez, Editor-in-Chief, SacLatino Magazine

EDITOR’S NOTE:  This is the first in a series of articles regarding jobs in energy and the hydraulic fracturing of shale oil rock known as “fracking.”  Is there a Latino job boom on the horizon?
SACRAMENTO, CA -- At the recent Hispanics In Energy Summit in Sacramento, it was revealed that energy jobs could reach over one million in California by 2020, due to workforce retirements and new jobs created especially in the oil industry. The new jobs will be created primarily in California’s Central Valley, which cumulatively has the nation’s third largest population of Latinos, and claims the nation’s largest deposits of shale oil.
Energy experts and economists view the extraction of shale oil as a solution for California’s and the nation’s dependency on imported oil. It is estimated by the U.S. Energy Department that the Central Valley could produce 15.4 billion barrels or 64 percent of the nation’s total shale oil resources. Moreover, the extraction of shale oil using a process called hydraulic fracturing could create up to one million new jobs in an area largely populated by Latinos. 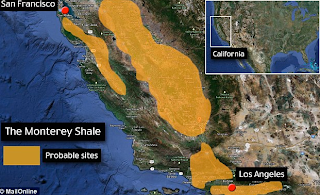 Although it is called the “Monterey Shale Oil Reserve,” the area encompasses the geographical area bordered by the City of Modesto on the North, to Bakersfield on the South, and the Sierra Nevada Mountains on the East, to the Pacific Ocean on the West. This geographical area also has very rich farmland that has drawn millions of Latinos over many decades to live and work in agricultural and peripheral type jobs. Now, new jobs will be created offering above middle-income salaries for high school and college graduates, plus it is anticipated that there will also be a growth of trade and vocational schools in the region as well.
“We believe this is going to turn the state’s unemployment data on its head,” Catherine Reheis-Boyd, President of the Western States Petroleum Association, told conference goers. “It’s a game changer in Latinos’ quality of life.” During her presentation, Reheis-Boyd referenced California Gov. Jerry Brown’s recent statement about the large finding of shale oil and its extraction: “The fossil fuel deposits in California are incredible…We want to keep the greenhouse gas emissions down, but we also want to keep our economy going…There will still be a lot of people driving around for a long time."
Reheis-Boyd shared that the types of jobs created will vary from “roughnecks” to office work and will require a high school education, minimum, to doctorate degrees for scientists and other professions.
“Much of technical jobs today require skill sets that are imported,” said Reheis-Boyd. “The jobs we offer do not require imported skill sets, only those educated and trained in California.”
The U.S. Government estimates that the economic benefits of the Monterey Shale Oil Reserve will grow personal income by $40.6 billion, increase local and state government revenues from $4.5 billion to $24.6 billion, and increase the state’s GDP by 2.6 to 14.3 percent. Economists suggest these increases would put California on a major economic revitalization track, improving its global ranking, and improving nearly every Californian’s daily life.
As with any method used to remove the earth’s natural resources, there are concerns about health and environmental impacts in extracting the oil from shale rock. The process is known as “fracking,” which is short for hydraulic fracturing, a process that uses high-pressured water to crack the shale rock open would be used in the Central Valley.
Fracking has been around since the 1950’s when oil fields went into decline. But, it wasn’t until the 1990s when new technology greatly improved the ability to combine fracking with horizontal drilling, allowing the extraction of shale oil in areas that could not be reached before, like the Monterey Shale Oil Reserve.
“The Monterey Shale Oil Reserve is the largest in the nation,” said Reheis-Boyd. “It could provide California with a supply of energy the state will need well into the future.”
- SacLatino