Nearly 100 spectators, servicemen and women, and retired military leaders observed Memorial Day this past May 27, 2913, at the nationally famed “El Soldado” monument in Sacramento, California.  Although a light rain and slight chill greeted the annual event, it did not deter those who came to recognize the contributions Latinos have made toward America’s freedom by serving in the various branches of the armed forces, and making the ultimate sacrifice.

California’s Mexican American Veterans Memorial is unique among the many memorials dedicated to war veterans throughout the United States.  Originally placed at what was once Sacramento’s Mexican American Center, the statue of “El Soldado” (the Soldier) was funded and established by the mothers and wives of Mexican American soldiers who had fallen during WWII.  Creating “La Sociedad de Madres” (Society of Mothers) in 1948, these women remained on task for numerous years until they were able to raise enough money to buy the stoned carved statue from Italy for a sum of $4000 and it was dedicated on May 10, 1951 (which was also mother’s day in Mexico.)  It was renovated in the 1970s and relocated to its current location facing the State’s Capitol building in 1990.

"During World War II, Hispanics were among the many who enlisted in the many branches of the armed forces," said Brigadier General (Ret) Robert Certantes.  "The Hispanics who served during that war received 13 Congressional Medals of Honor, a recognition that is given to those whose gallantry goes beyond the call of duty."

Although the military did not take tally or distinguish ethnicity during WWII, it is estimated that up to 500 thousand soldiers in Europe and the Pacific were Hispanic.  Thousands of these men received honors, including English and French medals.  During the Korean War, 9 Hispanics were awarded the Congressional Medal of Honor and hundreds more received other distinctions, in every branch of the U.S. military.

“Some talk about the Korean War being the forgotten war, well I still have my hat from that war and I can tell you it is not forgotten,” said Keynote Speaker Retired State Supreme Court Justice Cruz Reynoso as he placed the hat on his head.  “I’m 82 years old and a Korean Veteran and that is something those of us who served there cannot forget.”


Reynoso, who served on the California Court of Appeals and on the California Supreme Court, was selected to deliver the Keynote address by the Mexican American Veterans Memorial, a nonprofit organization, in conjunction with the California Department of Veterans Affairs.  During his military career, he was assigned to perform counterintelligence work until he was reassigned to Washington D.C. where he worked for the House Un-American Activities Committee, which he admits finding it distasteful.

“When I went to college, it only cost $100 per year and got an education that today costs $50 thousand per year,” said Reynoso, a UC Berkeley Law School Alum.  “We are spending more money on an endless drug war where studies show the use of illicit drugs is the same across all races, but yet there are more Latinos and African Americans serving time for a crime that needs drug rehabilitation, not incarceration.”

Joining Justice Reynoso in addressing the crowd was the Honorable Assemblyman Roger Dickinson who spoke about the commitment undocumented American soldiers have made toward America’s freedom.


“It is important to recognize those remarkable men and women who served our country knowing they had limited freedoms,” said Dickinson.  “In this country it is not who we are, but who we aspire to be.”

The annual ceremony concluded with a gun salute and the displaying of the wreath at the foot of the statue by the California Department of Veteran’s Affairs and the Capital City Chapter of the American GI
Forum. - SacLatino 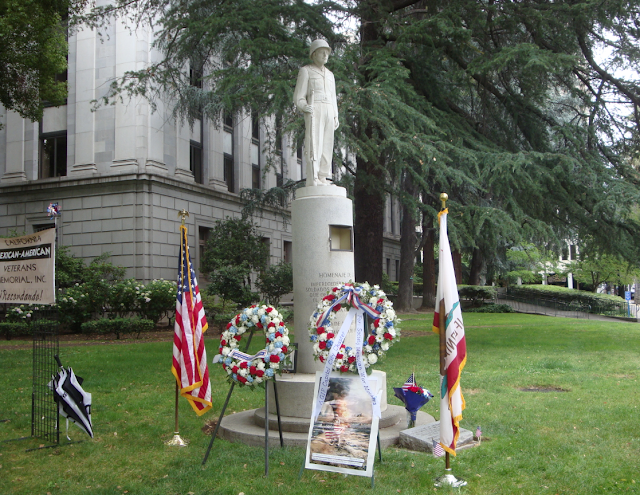