Five facts on unauthorized immigration in the U.S.

As we await the President's approach, here are things to consider
By Jens Manuel Krogstad and Jeffrey S. Passel, Pew Research Center 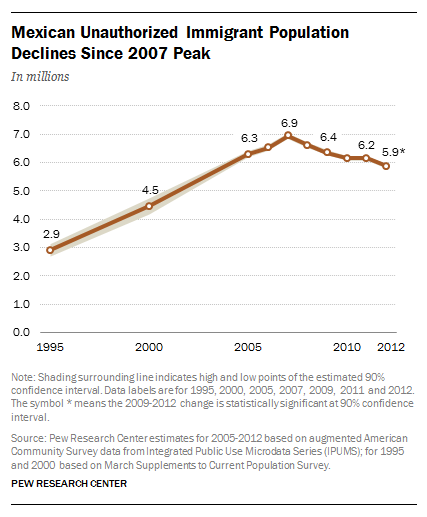 3.    Six states alone account for 60% of unauthorized immigrants—California, Texas, Florida, New York, New Jersey and Illinois. But the distribution of the population is changing. From 2009 to 2012, several East Coast states were among those with population increases, whereas several Western states were among those with population decreases. There are seven states overall in which the unauthorized immigrant population increased: Florida, Idaho, Maryland, Nebraska, New Jersey, Pennsylvania and Virginia. Meanwhile, there were 14 states in which the population decreased over the same time period: Alabama, Arizona, California, Colorado, Georgia, Illinois, Indiana, Kansas, Kentucky, Massachusetts, Nevada, New Mexico, New York and Oregon. Despite a decline, Nevada has the nation’s largest share (8%) of unauthorized immigrants in its state population.

5.    About 7% of K-12 students had at least one unauthorized immigrant parent in 2012. Among these students, about eight-in-ten (79%) were born in the U.S. In Nevada, almost one-in-five students (18%) have at least one unauthorized immigrant parent, the largest share in the nation. Other top states on this measure are California (13%), Texas (13%) and Arizona (11%).