Over 1.7 million eligible for the DACA Program and most are in California and Texas.
By Adrian Perez, SacLatino 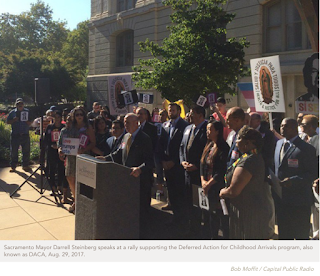 With President Trump threatening to terminate the Deferred Action for Childhood Arrivals (DACA) program by September 5, 2017, Sacramento City officials gathered at a rally to support its continuation. The DACA program prevents the deportation of undocumented children who were brought to the US before their 16th birthday.
DACA is a national immigration policy founded by the Obama administration in June 2012. Its purpose is to allow certain illegal immigrants who entered the country as minors, to receive a renewable two-year period of deferred action from deportation and eligibility for a work permit.
"On behalf of our 13,000 'Dreamers' and our great Sacramento community, we ask you to uplift, not tear down,” Mayor Darrell Steinberg told the crowd referring to the DACA eligibles in the Sacramento region.
The Pew Research Center estimated in 2014 that up to 1.7 million people might be eligible for the DACA program. As of June 2016, U.S. Citizenship and Immigration Services (USCIS) had received 844,931 initial applications for DACA status, of which 741,546 (88%) were approved, 60,269 (7%) were denied, and 43,121 (5%) were pending. Over half of those accepted reside in California and Texas.
“It doesn’t change anything that we do," said Sacramento Police Chief Daniel Hahn in reference to the possibility of the program being terminated. "I mean, our responsibility is to our community and enforce state and local regulations and a big part of that is maintaining trust.”
The DACA program was created after the federal government acknowledged that these undocumented children had been largely raised in the United States, and should be viewed as "low priority" individuals.  Moreover, approximately 65,000 of undocumented immigrant student population graduate from U.S. high schools on a yearly basis.
"They are wonderful, they are brilliant and they are the leaders," said Sacramento State University President Robert Nelsen. "President Trump needs to learn to lead with his heart.”
So does this mean President Trump is heartless or is he pressuring Congress to address the issue of immigration?
This issue could have been addressed in 2006 when Congress had proposed a bipartisan immigration reform bill, which was going to be signed by President George Bush, but was killed by Democrats to preserve their relationship with unions. In 2008, then candidate Barack Obama promised Latinos that immigration reform would be addressed in his first year in office. Instead he mounted the largest deportation campaign unlike never seen by the US. As a token of piece, after being called “the Great Deporter” by national Spanish media, he offered the DACA program, which did have an expiration date once a new president was elected.
In several statements made by candidate and now President Trump, DACA appears to have run its course. The White House has announced that Trump will end the program by no longer accepting new permits and allowing existing permits to expire. This is supposedly being done to pressure Congress into creating and passing immigration legislation that the White House would consider as adequate.
Because California and Texas will be the most impacted (125,000 in the Harvey disaster area alone), numerous legislators, Republican and Democrat, are telling the White House to reconsider the cancellation of the Program. This call includes Congressmen Jeff Denham and David Valadao, Senators Dick Durbin and Lindsay Graham. - SacLatino